Dr. Coo and the Pigeon Protest 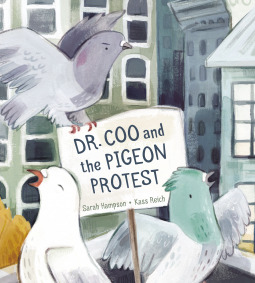 Summary: Dr. Archibald Coo is fed up with being disrespected.  He’s a worldly pigeon, and knows how important pigeons have been throughout history.  Messenger pigeons were used in Ancient Greece and some dropped medicine to soldiers during wartime.  Dr. Coo wants pigeons to have the respect they deserve, and so he hatches a plan.  Dr. Coo talks with the other birds, and they lament about how disrespected pigeons are.  Chased by children, swatted at with umbrellas, and shooed off of public statues.  The next morning, there’s not a pigeon in sight.  Human citizens of the city are confused and forlorn.  There’s nobody to feed stale bread or watch soar in between power lines.  Then, Dr. Coo delivers a letter of protest to the mayor asking for a compromise to be reached.  The mayor agrees, and the winged citizens of the city drop down notes upon the people which read “when you are loved, you can love in return”.

This book introduces the idea to young children that they can stand up for what they believe in, and change what they don’t think is right.  By using teamwork and polite conversation, Dr. Coo and his friends changed the minds of the people in their city.

Sarah Hampson is an award-winning columnist and feature writer for The Globe and Mail, Canada’s leading national newspaper. She started her journalism career in 1992, as a freelancer, mostly in magazines. It was on the strength of her award-winning magazine journalism that The Globe and Mail, then at the start of the newspaper war with the new National Post, invited her to write a column, starting in 1998. She writes on a variety of subjects – cultural trends, books, travel, food and people. She is also an author. Her memoir, Happily Ever After Marriage: A Reinvention in MidLife, was published by Knopf in 2010. A 32-page children’s picture book called “Dr. Coo and the Pigeon Protest” will be published in Spring 2018 by Kids Can Press. Born in Montreal, she has lived in many places: London, England, Geneva, Switzerland, Vancouver and Halifax. She was educated at Smith College in Northampton, Massachusetts, where she graduated with a degree in English Literature. She currently sits on the board of the Alumnae Association of Smith College, as she is committed to the value of a liberal arts school and to single-sex education for women.

Kass Reich was born in Montreal Canada. She works as an artist and educator and has spent a majority of the last decade traveling and living abroad. Kass graduated with a degree in Art Education from Concordia University then picked up and moved to Beijing where she worked as an early childhood educator for nearly three years. Working with the little ones inspired her to start making picture books for very young learners. After Beijing she lived in Hong Kong, London England and Melbourne Australia. She now finds herself back in Canada but this time in Toronto.

← Julián Is a Mermaid
Lucía the Luchadora →