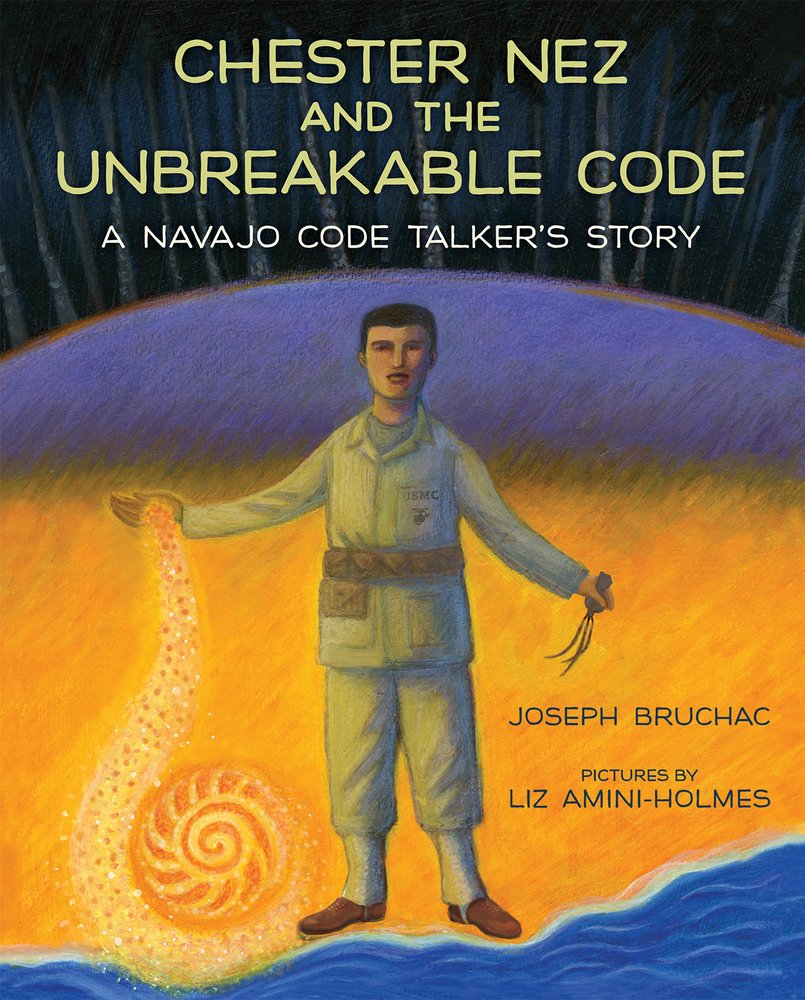 Summary: Once a Navajo boy named Betoli had to go to Fort Defiance boarding school, and was given the name Chester.  He was not allowed to speak Navajo, and his long hair got cut off.  Chester was very lonely, and longed for his traditional Navajo lifestyle that was banned at Fort Defiance.  He enjoyed learning, but did not agree that the Navajo language was worthless, and promised himself that he would never lose ties with his cultural heritage.  When Chester was in tenth grade, the Japanese attacked Pearl Harbor. Considering himself a brave Navajo warrior, he vowed to fight for his land.  One day, Marines came to Chester’s reservation and asked for people who could speak both Navajo and English.  The Japanese were too good at breaking the secret codes the US tried to use, and they wanted to try using Navajo because it is an incredibly complicated language.  Chester became proud that he never stopped believing in his first language, and signed up for the military.   32 Navajo men were chosen to build these codes for the military, and Chester loved it.  Then came the time to test the code in battle, and it worked!  Chester worked very hard, despite seeing terrible things during combat.  He prayed in Navajo everyday and used traditional medicines to keep himself healthy.  When he returned home, he was depressed and tired from seeing so much death and violence.  Chester also could not tell anyone about the secret Navajo codes.  His family could sense he needed help, and performed a traditional Enemy Way ceremony for him to help ease his troubled mind.  This ceremony was also done for children returning from boarding school, and Chester had been through the ceremony before.  The ceremony helped Chester, and he began to feel better.  The Navajo code talkers were instrumental in winning WWII, and Chester was proud of his heritage and ability to merge into the white world.

This is a great book about something not talked about enough.  It gently explains war without glossing over too much, and provides fantastic historical context about how Indigenous people have been treated by the government.  After the story there is an Author’s Note about the life of Chester Nez, as well as a portion of Navajo code with phonetic pronunciations and a timeline of events.

For over thirty years Joseph Bruchac has been creating poetry, short stories, novels, anthologies and music that reflect his Native American heritage and traditions. He is the author of more than 120 books for children and adults. The best selling Keepers of the Earth: Native American Stories and Environmental Activities for Children and others of his “Keepers” series, with its remarkable integration of science and folklore, continue to receive critical acclaim and to be used in classrooms throughout the country.

Born and raised in the San Francisco Bay Area, Liz Amini-Holmes wanted be an archeologist, a paranormal researcher, an astronaut but most of all she wanted to be a detective with Scotland Yard. However, she decided working as an artist was way more fun than any of those jobs and required a lot less math. She has a BFA in Illustration from Academy of Art University and University of San Francisco. She is an award winning aritst and her work ranges from poster design, book illustration, editorial illustration, to apparel design, art direction, advertising, merchandising, and multimedia. She’s proficient in multiple forms of traditional media as well as digital tools.

← A Lady Has the Floor
Libba; The Magnificent Musical Life of Elizabeth Cotten →