Summary: Once upon a planetoid lived a girl named Cinderella.  She dreamed of fixing fancy rocket ships one day, but until then had to be satisfied with robot dishwashers and zoombrooms.  Late at night, she studied ship repair.  One day the whole family is invited to the Royal Space Parade!  Cinderella’s stepmother and stepsisters tell her there’s no room in their ship, she can fix the broken one and come along.  Unfortunately they fly away with her toolbox!  Now Cinderella is stranded…until a fair godrobot shows up!  The robot makes Cinderella new tools and gives her a shiny blue spacesuit.  She zips over to the parade, but sees the prince’s spaceship breaking down.  Cinderella fixes it in a jiffy and he invites her to the Gravity-Free Ball!  Cinderella and the prince talk about rockets for hours, but she accidentally leaves behind her socket wrench when she leaves the ball.    The prince begins looking for Cinderella all across the galaxy, but she is locked in the attic by her stepmother.  The prince asks her stepsisters to fix a broken ship with the wrench as a test to find the mysterious rocket-loving girl he met at the ball, but they can’t do it.  Cinderella escapes the attic and blasts off in a jetpack, chasing the prince’s ship.  She passes the prince’s test, and he proposes to her.  Cinderella replies “I’m far too young for marriage, but I’ll be your chief mechanic!”

We love love LOVE this book!  This book’s main character has rad pink hair, a love for science, and doesn’t need a boy to make her happy.  This twist on the classic tale of Cinderella and creates an empowered role model for young children, especially girls!  The illustrations are incredible, and the messaging refreshing.  We cannot speak highly enough about this book, it’s joined the ranks of must-haves and has been gifted at every opportunity since discovering it!

Deborah Underwood has worked as a street musician and at an accounting firm but for years has been a full-time writer who occasionally plays the ukulele. She is the author of several picture books, including New York Times bestsellersThe Quiet Book and Here Comes the Easter Cat, as well as Monster & Mouse Go Camping, Interstellar Cinderella, and Bad Bye Good By 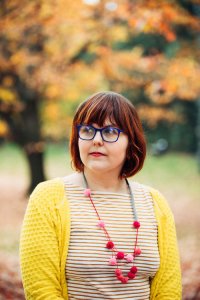 Meg Hunt is an illustrator, educator and maker of things. She lives and works in the wooded city of Portland, OR. Her goal is to fill the world with my creations, and make people happy in the process. Her first picture book Interstellar Cinderella was published by Chronicle Books in 2015 and has been given starred reviews from Booklist and Publisher’s Weekly, who also listed it as one of their best summer books of the year. She was featured as one of Publisher’s Weekly’s Flying Starts for Summer 2015 as well. In 2015, she received a Gold Medal from the Society of Illustrators for Illustrators 58, Uncommissioned category. Currently, her focus is creating charming and colorful character-based illustrations, lettering and patterns for editorial/publishing/product markets.