For ages: Middle Grades YA Book

Summary: Mia Tang and her parents emigrated from China two years before the book begins.  When the book begins, it is summertime in California and the family is living in their car.  Soon, a job opportunity to manage a hotel pops up and the family jumps at the chance.  The owner of the hotel is named Mr. Yao and he is not kind.  He finds every opportunity to withhold paychecks from the family.  He is racist, rude, and Mia does not like him one bit, especially because he won’t let her go swimming in the pool.  The hotel is in a new school district, and when Mia starts the 5th grade she is only 1 of 2 Asian students in the whole grade.  The other is Jason, Mr. Yao’s son.  The pair do not get along.  Mia takes on front desk responsibilities with gusto, and befriends the “weeklies” quickly.  These longtime guests live at the hotel, and together they form a ragtag family.

Mia makes a single friend at school, Lupe.  Lupe and her family are also immigrants, and very poor like Mia’s family.  Other than Lupe, Mia is teased mercilessly.  Mia is hurt, but has other more important things to spend her time doing.  She desperately wants to be a writer, despite her mother telling her to focus on math instead.  Mia begins writing letters to get practice, and comes across an essay contest where the winner receives a small motel in Vermont!  Earning the money for the entry fee, working the front desk, and dealing with Mr. Yao is more than enough for a young girl to handle.  Then her parents begin receiving visitors.  Other immigrants from China that are in much worse states than the Tangs.  Mia’s parents let them stay the night for free at the hotel without Mr. Yao’s knowledge, and feed them.  Soon a system is developed where Mia wears a hat when Mr. Yao is around so people know not to show up.

This book is fascinating, and comes with an extensive Author’s Note detailing many of the events in the book and how they happened to the author herself, in real life!  There are many parallels between Mia and Kelly’s life, as Kelly Yang’s family also managed hotels in California when Kelly was young.  This is an awesome book.  It’s funny, heartfelt, and talks about the strength and resilience found in the immigrant youth experience.

About the Author & the Cover Artist: 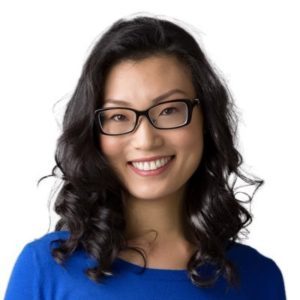 Kelly immigrated to America when she was 6 years old and grew up in Southern California, where she and her parents worked in three different motels. She eventually left the motels and went to college at the age of 13 and law school at the age of 17. She is a graduate of UC Berkeley, where she majored in Political Science, and Harvard Law School. After law school, she gave up law to pursue her passion of writing and teaching children writing. She is the founder of The Kelly Yang Project (kellyyang.edu.hk), a leading writing and debating program for kids in Asia.

As a teacher, Kelly helped thousands of children find their voice and become better writers and more powerful speakers. Before turning to fiction, she was also a columnist for the South China Morning Post for many years. Her writing has been published in The New York Times, The Washington Post, and The Atlantic. She has three children and splits her time between Hong Kong and San Francisco, California. 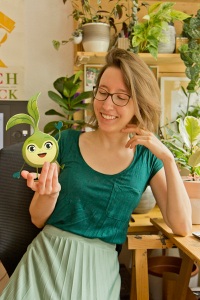 Maike Plenzke and is a freelance illustrator and comic book artist from Berlin.
She loves drawing diverse women and to explore nature in her work.

Welcome to The Tiny Activist!