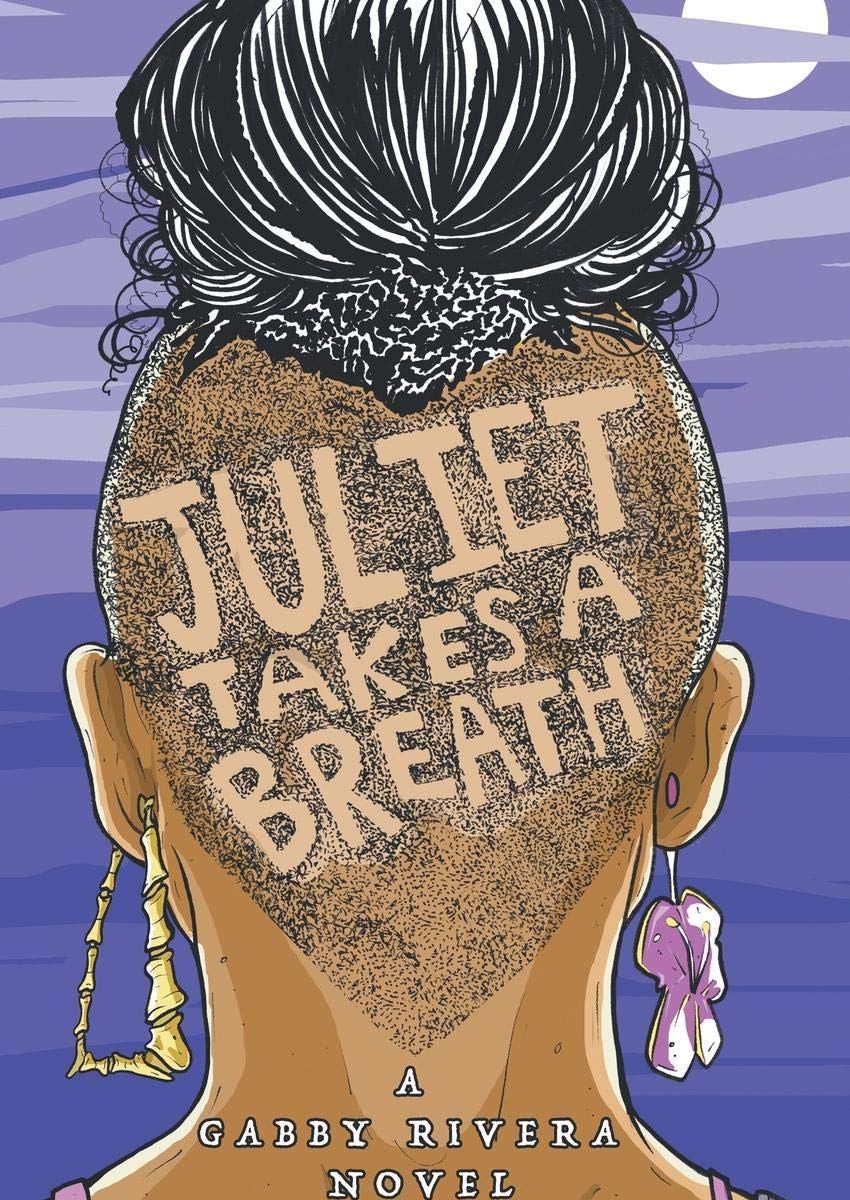 For ages: YA Book

Summary: Ya’all this book is SO IMPORTANT.  Juliet is a young Puerto Rican woman on her way to the internship of her dreams.  All she has to do is come out to her entire family at her going away dinner and then hop on a plane.  Once in Portland Oregon, this Bronx girl gets the culture shock of a lifetime.  Hippies, White Feminism, learning how to be both an intern and away from her girlfriend for the entire summer-it’s a doozy.  Juliet is able to take the time to get to know herself, navigate growing up and getting a crash course in queer theory politics takes up most of her time.  Not to mention there’s dealing with the emotional fallout of a mother who thinks her sexuality is just a phase, and getting to know the very cute librarian Kira during her research as well.

This book is something everyone can relate to.  Having a book that centers queer brown voices is something that youths today need.  It openly calls out racism found within white feminism, and how it permeates every space.  Juliet learns a lot about the world, her place in it, and how sometimes running away isn’t going to solve things.  Juliet wrestles with emotions, long-distance relationships, and idolizing mentors that don’t turn out to be exactly what she expected.  Everyone should read this!!

Gabby Rivera’s critically acclaimed debut novel Juliet Takes a Breath was called “f*cking outstanding” by Roxane Gay and will be published in hardcover for the first time in fall 2019 by a new publisher. Gabby has also written in the Lumberjanes universe for Boom! Studios. Her latest short story O.1 can be found in Victor LaValle’s recent anthology A People’s Future of the United States. Gabby is currently working on her next novel.

When not writing, Gabby speaks on her experiences as a queer Puerto Rican from the Bronx, an LGBTQ youth advocate, and the importance of centering joy in narratives as Latinx people and people of color at events across the country.

Gabby Rivera is so damn thankful she was able to finish this book. She wants queer brown girls to see themselves everywhere and to be proud of who they are. Gabby was a nerdburger who always wrote in journals, on stray napkins, and even on her sneakers when it was cool to do that. She’s been published in anthologies and journals put together by other radical, creative folks who also see a world that strays far from the mythic norm. Gabby has worked with Autostraddle for almost five years. In that time, she’s written about feminism, kissing girls, Nicki Minaj, radical politics and falling in love with queer brown communities. She is currently the Youth Programs Manager at GLSEN and is developing their National Student Council and curriculums for GSAs across the country. She’s fostered other LGBTQ youth groups and taught as a multi-media artist for organizations such as the DreamYard Project. She’s gonna write more books, y’all. Please read them. It’s very important. Be on the lookout for her latina punk band sci-fi epic, Supermoon. Coming some time in the distant but gorgeous future.

Cristy C. Road is a Cuban-American artist, writer, and musician. Through visual art, storytelling, and punk rock music, C.Road has thrived to testify the beauty of the imperfect since she began creating art in her hometown of Miami, FL. She grew up as a self-taught figure drawing artist with a penchant for all things that questioned society and began publishing Green’Zine in 1997– a fanzine which was originally devoted to the punk rock group, Green Day. Merging with the anti-authoritarian intentions of the punk rock community, the zine transformed into a manifesto about being a queer Latina abuse survivor, and her journey towards self-acceptance. Her preferred visual art mediums are Micron Ink pens, Chartpak markers, acrylic paint, Gel Pens, white-out, (and sometimes Photoshop). While taking both writing and visual elements to a more serious level, her diagram of lifestyle and beliefs remain in tune to the Greenzine’s foundations.

C.Road graduated from the the Ringling School of Art and Design in 2004 with a BFA in Illustration, in order to support her ambition to eventually teach. Although, at a private art school in a red state, she was fairly infamous, as the punk feminist who changed her legal name to a Green Day song and spent most of her time protesting the representation of gender and race in art. Now, C.Road has almost 20 years of independent publishing under her belt, along with years of creating countless illustrations for a slew of magazines, record albums, event posters, and social justice organizations; as well as years of teaching through workshops, proffesorships, and lectures across the nation.

In early 2006, C.Road released her first illustrated novel, Indestructible (Microcosm Publishing), a 96-page narrative about high school. In 2008, she released Bad Habits (Soft Skull Press), an Illustrated story about healing from abuse; and lastly in 2013, her most recent book, Spit and Passion (Feminist Press, 2012), a coming-out memoir about Cuban identity, discovering Green Day, and survivng in the closet. C.Road’s most recent project is The Next World Tarot (2017), a 78-card tarot deck detailing themes of justice, resilience, accountability, and reclaimed magic; illustrated, written, and initially self-published by C.Road.

Aside from creating art; Road is a songwriter and guitarist, having fronted the pop-punk group, The Homewreckers from 2008-2016. She currently fronts Choked Up, a project that doesnt stray too far from the Homewrecker’s foundations, but proves a departure in style and bilingual lyrics.

Having organized entire tours for The Homewreckers, Road has been performing readings, workshops, and lectures since first touring with her art in 2005. She’s traveled nationally and internationally on her own, and namely with The Homewreckers, Sister Spit: The Next Generation (an all queer spoken word performance tour), and Race Riot! (A national tour hosted by The People of Color Zine Project). Cultivating a performance trajectory with a consistent show of defiance, she performs at bookstores, record stores, basements, bars, college campuses, and beyond. Some notable presentations have been held at The New Museum, The Latina Health Summit, Smash it Dead Fest, The Brooklyn Museum of Art, La Mama Theatre, Yale University, and the Museum of Modern Art.

Cristy C. Road is a Gemini Sun with a Moon in Cancer and lives in Brooklyn, NY

← The Grizzly Mother
What Riley Wore →