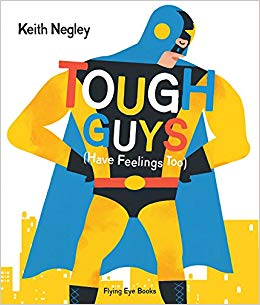 For ages: 3 years and up

Summary: This is an adorable book that helps to dispel myths that create toxic masculinity.  Focusing on “tough guys” like superheroes, ninjas, and bikers, the book talks about how everyone feels feelings and it’s ok to show them.

The book’s wording is simple and assuring, the bright illustrations giving plethora of examples when a person might be feeling strong emotions like frustration or sadness.  This book is also great for decoding emotions on others’ faces, and provides rich opportunities for discussion about social-emotion skills that can branch off to brainstorming about how to problem-solve or make a sad friend feel better.

There are so many distressing stereotypes that people feel pressure to fulfill.  This includes the ultra-masculine sports enthusiast and the delicate flowery ballerina, none of escape unscathed.  We as educators and caregivers have the power to take some of the pressure off to conform, and we are obligated to do as such.  Tough Guys (Have Feelings Too) is great because of it’s simplicity, it can be read to young audiences and begin to counteract the negative effects of forced toughness.

This book was sent to us by Flying Eye, but all opinions are our own!

Keith’s work has appeared on book covers, children’s books, t-shirts, album covers, posters, skateboard decks, and even a watch. He is a frequent contributor to The New York Times and New Yorker in addition to many other national publications. He received his BFA from the Milwaukee Institute of Art and Design in 2000, and his MFA from The School of Visual Arts in New York City in 2013 and doesn’t regret the student debt one bit. He’s won 4 medals from the Society of Illustrators, a medal from the Society of Illustrators West, and 2 medals from the 3×3 International Illustration annual. His book Tough Guys (Have Feelings Too) received a Kate Greenaway Medal nomination in 2016. His most recent book Mary Wears What She Wants was released in January 2019 with Balzer + Bray (Harper Collins). Keith resides in the mountains of Bellingham Washington with his wife and two boys surrounded by giant spiders and teaches illustration at Western Washington University.