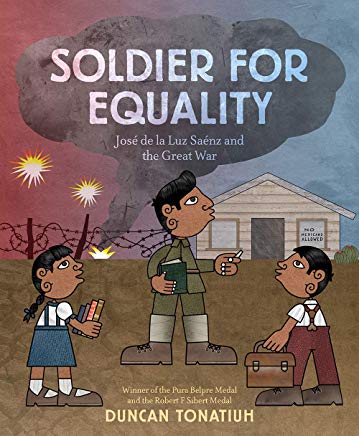 Summary: Luz was born in America, but his family was of Mexican descent.  He is teased for it, and sometimes gets in fights.  When Luz grows up he becomes a teacher and after a long day of teaching children, he teaches night classes to illiterate adults.  He becomes frustrated at the lack of access to supplies in his school simply because he teaches Mexican students.  Luz decides to join the army to demonstrate that Mexican-Americans love their country as much as the white Americans did, and Luz decided to fight during WWI.  He is sickened when he meets others who experienced racism along with him, and is frustrated by the fact that he is taunted by white soldiers in the barracks when they’re supposed to be a united front fighting against the injustices occurring in Europe.

When he goes to France, Luz decided to learn French to be able to keep up with the news.  He soon became a translator and is stationed in a hole underground receiving and translating messages.  Luz thinks about how education has literally built a protective wall around him, and is grateful.  He also becomes an English teacher for other soldiers, most of the Mexican-American like himself! When he returns home, things are not better for the average Mexican-American person like himself, so he began to start organizations dedicated to equity and break down barriers for his community.

This book is beautiful, and gives a lot of detailed historical information about World War I.  Luz is a figure that tried his best to help others and be respected in the process, hoping that if people saw past stereotypes about Mexican-Americans, he would make life better for all.  He began the League of United Latin American Citizens and was involved with many civil liberties organizations throughout the duration of his life.  In the back is a glossary, author’s note, timeline of events, and an index.

This book great, and we love all of Duncan Tonatiuh’s work!  While definitely for elementary aged children because of the talk of war, harm, and specific historical details, it is a great representation of an individual who was patriotic as well as an activist.  We need more books about figures that started grassroots organizations in a quest to make life better for marginalized communities, and this book is a fantastic addition!

Duncan Tonatiuh (toh-nah-tee-YOU) is the author-illustrator of The Princess and the Warrior, Funny Bones, Separate Is Never Equal, Pancho Rabbit and the Coyote, Diego Rivera: His World and Ours and Dear Primo. He is the illustrator of Esquivel! and Salsa. His books have received multiple accolades, among them the Pura Belpré Medal, the Sibert Medal, The Tomás Rivera Mexican-American Children’s Book Award, The Américas Award, the Jane Addams Children’s Book Award and the New York Times Best Illustrated Children’s Book Award. Duncan Tonatiuh is both Mexican and American. He grew up in San Miguel de Allende, Mexico and graduated from Parsons School of Design in New York City. His artwork is inspired by Pre-Columbian art, particularly that of the Mixtec codex. His aim is to create images and stories that honor the past, but that are relevant to people, specially children, nowadays.

← My Green Day
Along the Tapajós →