It’s David’s first day at a brand new school and he’s feeling a little anxious about making friends.  The book follows his wander around the playground seeing what everyone else is doing, and looking for someone to play with.  But David has something in his pocket that might be able to help him.

I like how the title is descriptive of the game David has in his pocket, and also a metaphor for being in a new environment.  The illustrations of the playground are pulled back, making it seem almost endless.  David doesn’t necessarily seem scared, but he takes his time checking out the new playground and deciding who to invite to play the game he has in his pocket-elastic skip (also known as Chinese jumprope or Elastics, there are many different names) and make some friends.  This is a sweet and gentle book that also introduces a game to play, which would be a fun extension activity for a classroom!

This book was kindly sent to us by Kids Can Press, but all opinions are our own!

Alan Woo was born in England, came to Canada when he was a young boy and grew up in Vancouver, British Columbia, where he still lives. He always wanted to be a writer, and gets his inspiration from his Chinese-Canadian heritage, friends and family, reading lots of books, going to live theatre, meeting new people, traveling and playing with cats! His work has been published in Ricepaper magazine and Quills Canadian Poetry Magazine. 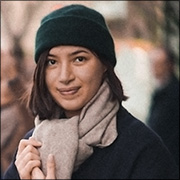 Katty Maurey is an illustrator working from Montreal.

Born in Paris to a Chinese mother and a French father, she grew up in Hong Kong and later Paris before calling Montreal her home. She has always loved illustrated books and make-believe worlds. As a young girl, she could spend hours absorbed by details in the pictures that made stories come to life. Loving both nature and the city, Katty developed a fascination for the vivid colors around her. In her subtle way, she strives to express the small things in life that turn our everyday world into a fantastical one.

Later on, she studied graphic design at UQAM. She then went on to work professionally as an illustrator for various books published by Kids Can Press, Owl Kids, la courte échelle and la Pastèque. Her books are published in both French and English, and have been translated to Spanish, Catalan, Korean and Japanese. Among other distinctions, she was nominated for the Governor General’s Award for French-language children’s illustration.

When not in her garden, Katty spends her artistic time between illustrations for books and working on multimedia shows, coming up with fun costumes and lavish set designs where she can let her imagination run wild. Among the many things that occupy her time, she always tries to make room for her lazy dog and her very slow-blooming orchids.

Following an extensive stay in Rome in the winter of 2019, she is currently working on an illustrative
project that draws inspiration from Greek mythology, Roman history and tales of the ancient world.