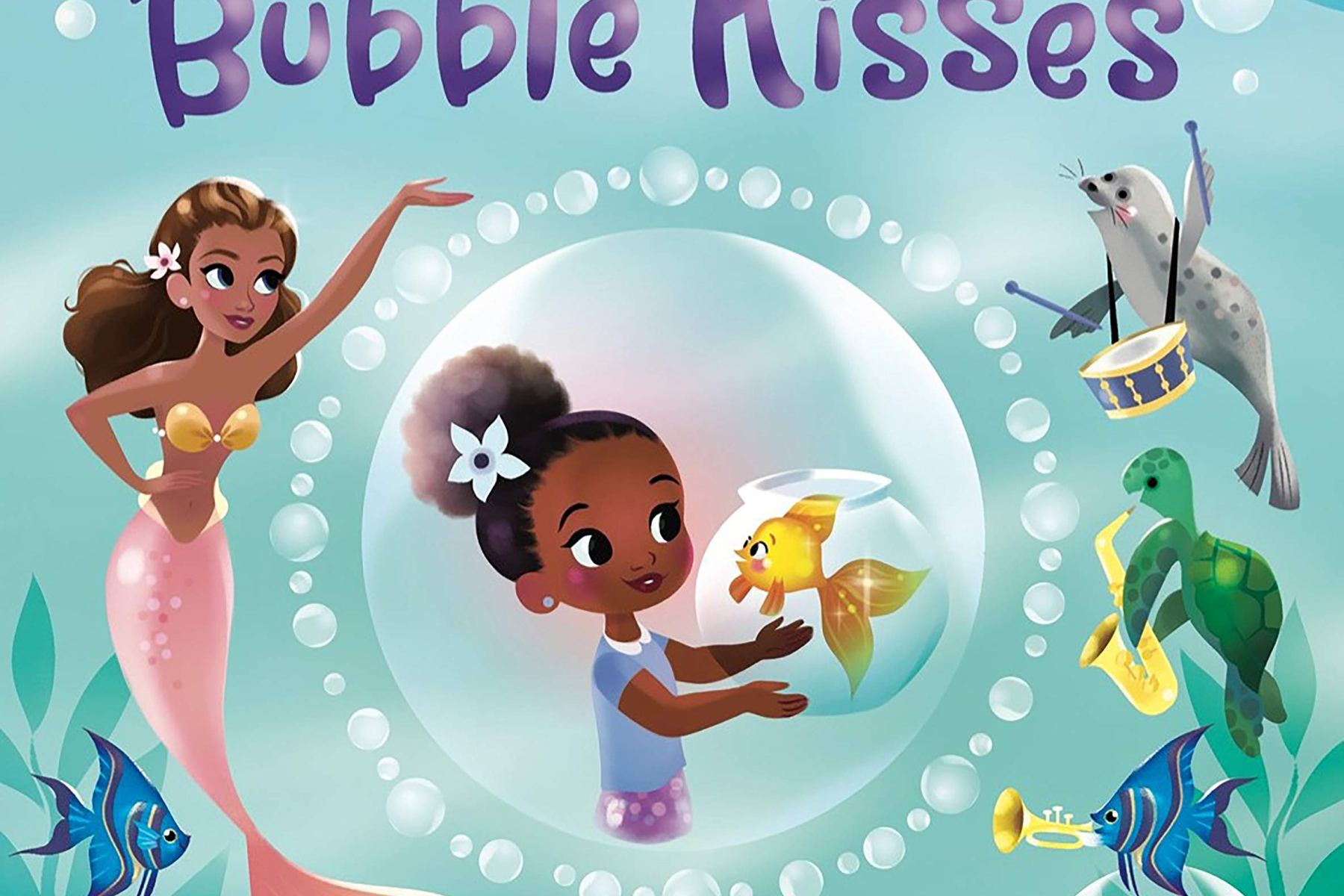 For Ages: any age (CD included!)

This story is all about a young girl and her fish, Sal. Sal may not be able to play fetch, jump, or snuggle like other kids’ pets, but Sal can do something even cooler-turn the girl into a mermaid with bubble kisses!

This book comes with a downloadable song and a bonus CD! Bubble Kisses is filled with adorable and cheerful illustrations. Our main character explores the fantastical underwater atmosphere, seeing pirate ship concerts and animals playing instruments. This story is simply sweet and fun, with a gorgeous color palette in purples and blues. The lyrical wording of the book works perfectly for the song, and author Vanessa Williams has done a great job creating a magical underwater world.

The illustrations are so cute, and I know so many little kids who would love to dance and sway to the music while pretending to be merpeople! This is a perfect example of Black and Brown joy, there is no hard-hitting moral or tribulation to overcome. The book is pure fun, and I think we all need a bit of that right now. I would have definitely used this in the classroom for a brain break or a cleanup song, and I’m sure there would have been lots of conversations about the different animals within the pages (and whether or not they really play underwater concerts)!

This book was kindly sent to us by Sterling Kids, but all opinions are my own.

Vanessa Williams is one of the most respected and multi-faceted performers in the entertainment industry today. Having sold millions of records worldwide, Vanessa has also achieved numerous #1 and Top 10 hits on various Billboard Album and Singles charts: Pop, Dance, R&B, Adult Contemporary, Holiday, Latin, Gospel and Jazz.

Her critically acclaimed work in film, television, recordings and the Broadway stage has been recognized by every major industry award affiliate including 4 Emmy nominations, 11 Grammy nominations, a Tony nomination, 3 SAG award nominations, 7 NAACP Image Awards and 3 Satellite Awards. Her platinum single “Colors of the Wind,” from the Disney’s Pocahontas, won the Oscar, Grammy and Golden Globe for Best Original Song.

A graduate of Syracuse University, Vanessa is a strong advocate for equal rights, especially concerning the gay community and minorities. She was honored with the Human Rights Campaign “Ally for Equality” Award for her humanitarian contributions. Vanessa also achieved a career pinnacle with a star on the Hollywood Walk of Fame in 2007.

Vanessa’s autobiography, “You Have No Idea,” co-written with her mother Helen Williams, was a New York Times Best Seller in 2012. Her recent Broadway credits include co-starring with Cicely Tyson in The Trip to Bountiful, (the #1 play of the 2013 season), After Midnight (2014), and a special limited engagement in Hey, Look Me Over at New York City Center in 2018. Vanessa is currently in Josie Rourke’s City of Angels in London’s West End.

Vanessa is the mother of four – Melanie, Jillian, Devin and Sasha. Her charitable endeavors are many and varied, embracing and supporting such organizations as Concerts for America, Special Olympics and several others. Vanessa is involved with and committed to the Elizabeth Taylor AIDS Foundation.

Vanessa is one of the world’s most accomplished concert artists, appearing regularly with the most prestigious symphony orchestras in the world, most recently with the National Symphony Orchestra at The Kennedy Center.

Born in Brooklyn, New York, Tara Nicole fell in love with children’s books from visits to the local library. This passion for illustration developed into one for animation, as well. Her education in art began early, from classes at Pratt in her youth, to more formal training at RISD and California Institute of the Arts, earning her a BFA in Character Animation in 2002. Since graduating, she has worked for Dreamworks, Nickelodeon, Fox Animation, PBS, CBS, Cartoon Network, Netflix, and most recently, Disney.

← Drawing on Walls: A Story of Keith Haring
My Maddy →