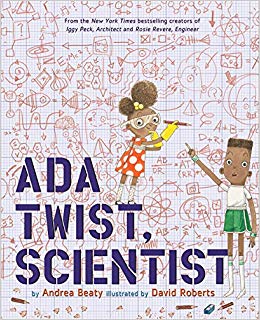 Summary: In a flowing and lyrical story, we learn about Ada, who did not speak until she was 3 but left a path of destructive curiosity in her wake wherever she went.  When she did speak, she asked question and questions after question.  Ada’s parents just smiled, and said she would figure out all of the answers.  Supportive & kind, her parents know she has the trappings of a great scientist!  Ada begins to experiment and construct hypothesis after hypothesis, although does take a short stint in the Thinking Chair when she tries to put the cat in the washing machine (to make it smell better!).  In the Thinking Chair, she refines her scientific methods and makes a plan….scribbling all over the walls. Upon seeing this, her parents again decide they will figure out how to keep up with such an enchanting and intelligent child like Ada.

Character Ada is named after Ada Lovelace, we find this out in the short Author’s Note on the last page!  This book is so important, Ada is a little girl of color and an unstoppable scientific force.  So often books with POC characters are linked to oppression and slavery, and Ada’s story is just the opposite.  Ada is not expected to contain her enthusiasm for science and learning, in fact her family is the one that adapts to her.  One of the illustrations show her writing on a huge roll of paper after the wall incident.  Ada’s parents work with her, providing a fantastic role model for both Ada and her brother as well as readers! 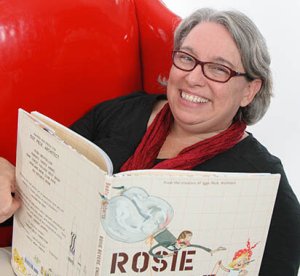 Andrea Beaty was raised in southern Illinois in a town so small she knew everybody and their pets. And they all knew her. Andrea was one of six kids and we spent our summer days traipsing through the fields and forests hunting for adventure.  Always, it was fun and often, they laughed so hard they blew Orange Crush or Grape Nehi Soda out their noses. She still avoids Grape Nehi … just in case.

Andrea was a big reader as a kid and LOVED Nancy Drew and Trixie Beldon Mysteries.  Then she moved on to Agatha Christie books and then the classics.  Don’t tell anyone, but her secret ambition is to star in a Broadway musical and Andrea is often tempted to break into song and dance at very odd moments. Mostly in the frozen food section of her grocery store!  They have very good lighting.

Andrea attended Southern Illinois University and studied Biology and Computer Science. After that, she worked for a computer software company. Andrea helped people with their computer problems (“Did you try turning it off and on again?”) and some technical writing. Andrea didn’t know at the time, but tech writing was great training for writing for kids because it taught her to be a fierce self-editor.

Now, she lives in Chicago with her family. Andrea visits lots of schools each year to share her love of reading and her writing journey with kids and educators. 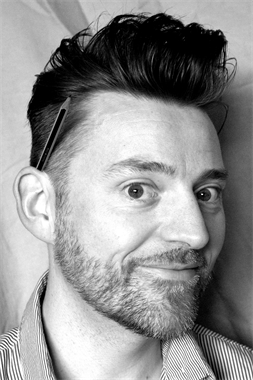 When David Roberts was at school, he claims he wasn’t very good at anything so the teacher would give me projects to produce big pictures for the school hall. He remembers doing one of Death rowing in a boat on the river Thames with a dead dog floating past!

David has always been drawing ever since he was a very small child and then when he left school at 16, he went to Art College. There, David did a foundation course trying out all different types of art practice. The thing David thought he wanted to do the most was costume and fashion design so he did a degree in fashion design.

David ended up being a children’s book illustrator and it was always his dream to do this! Although David tried to pursue a career as a fashion illustrator first. When he met Christine of Artist Partners she pointed out to him that he was drawing characters and perhaps he should focus more on publishing and in particular children’s books.